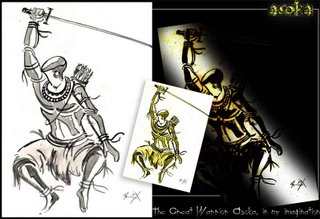 This i drawn directly with water color. I tried to represent Ashok (The great warrior of indian history) in my imagination, how he was?. According to indian history he was the greatest warrior in history, he killed his 99 brothers, destroyed lot of states to get the kingdom. Ashoka succeeded in conquering Kalinga after a bloody war in which 100,000 men were killed, 150,000 injured and thousands were captured and retained as slaves. The sight of the slaughter involved in his conquest deeply distressed Ashoka and deeply affected his mind. This was a turning point in his life. He renounced war and sought peace in Buddha’s preachings of love and ahimsa (non-violence). The war also developed in him a hatred for all kinds of violence. So he gave up hunting and slaughtering of animals. He became a strict vegetarian. In this art i tried to reflect the warrior’s character by mixing the abstract touch in human figure. Hope u will appreciate for it. I have mentioned some links if some body want to know about him.

If you want to know more here it is
home based business opportunity
http://www.home-businessreviews.com